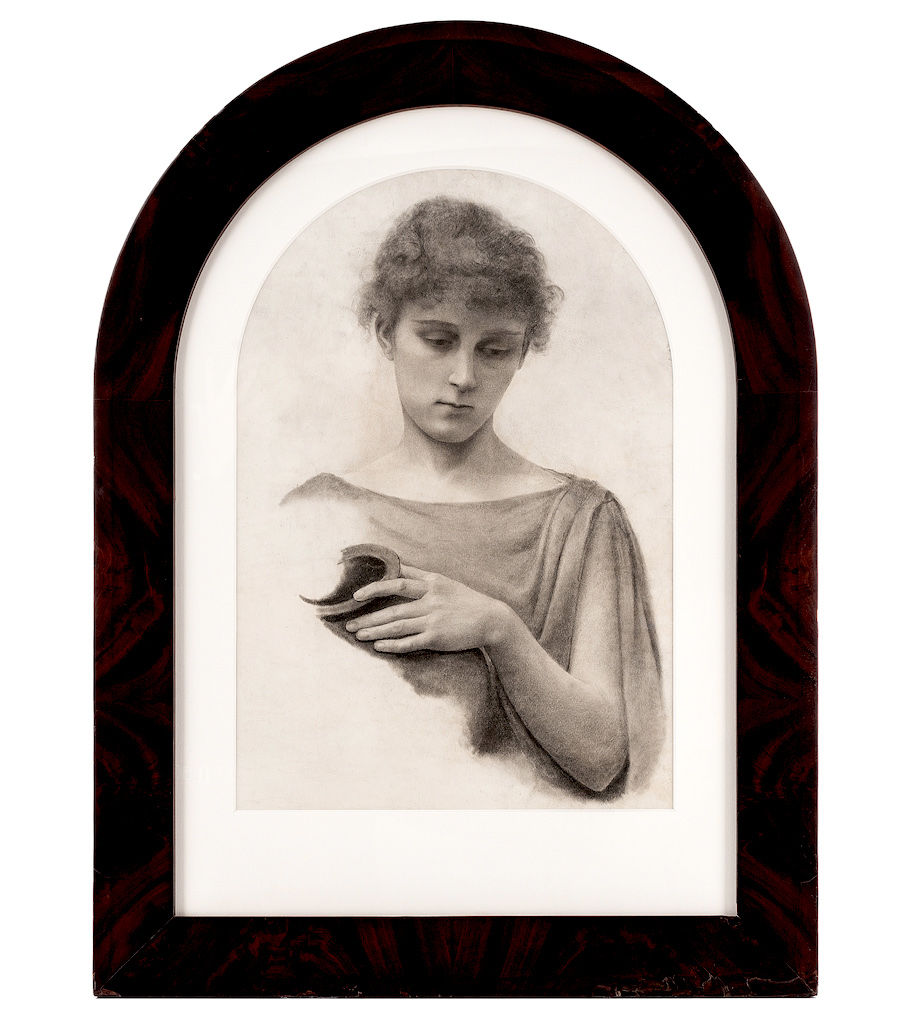 Grace Elizabeth Gladstone (nee Page) was born in Birmingham in 1873. Her father the Reverend Richard Page died in 1879 leaving a modest estate.  It would seem that the family left Birmingham soon after and by 1881 she was living in Lewisham, London in the house of her aunt and uncle. The uncle, Alfred Coveney Page was a successful civil engineer and therefore likely to have been a capable draughtsman; he might have had some influence on Grace’s early life.

No other obvious figures explain her artistic background, though by 1891 she was a student in Sydenham, likely studying in the nearby Crystal Palace School of Art which had relocated there in 1858.  Her early teachers were Harry Windsor-Fry (1862-1947) and Herbert Bone (1853-1931) , both obscure, talented artists who were feeling the afterglow of the pre-Raphaelite brotherhood. It was  around this time that Grace would have come into contact with Eleanor Fortescue-Brickdale (1872-1945), who was studying at the same school. They were likely friends; later enrolling at the Royal Academy Schools within a few months of one another. In 1898 Grace became the subject of one of Fortescue-Brickdale’s book plates.

She remained at the Royal Academy after her marriage to George Edward Gladstone in 1896, developing an accomplished style, which benefited from the system, which saw a number of visiting Academicians teach in the school for short periods. In 1895, she would count names such as John Singer Sargent, John William Waterhouse, Frank Bernard Dicksee and William Blake Richmond among her many distinguished tutors.

The 1901 census describes her as an artist and sculptor, living in the house of her husband’s parents. It was about this time that she would be in close contact with her sister-in-law, Annie Martha Gladstone (1857-1932), who, writing under a male pseudonym, authored “Another View on Jane Austen’s Novels.” She also contributed other essays to the same journal: one about Ralph Waldo Emerson, delves into the Feminism  of the American poet and novelist Louisa May Alcott (1832-1888) and Margaret Fuller (1810-1850), an early advocate on the rights of women. Another essay of 1906, criticised the state of politics, literature and society in general.

The radicalism of the house seems to have left some impression on her. And her frequent exhibitions at the Royal Academy between 1902 and 1907, give her addresses as Settlement Houses, first Mansfield House in Canning Town and later the Passmore Edwards Settlement in Bloomsbury. She and her husband appear to have been devoted members of this reformist movement, with him serving as the warden of Tavistock Place from 1903-1912. It is likely that both would have been there to witness the historic debate between Millicent Fawcett and Mary Ward on the direction of women’s suffrage in 1909.

The direction of her artistic career in the next few decades is uncertain. Her dealings with the Royal Academy ended abruptly in 1907 and she later became a member of the Royal Society of British Artists (RBA), the alternative group which broke away from the Royal Academy in 1823.

She had three children between 1907 and 1912. The census of 1911 lists her occupation as an “Artist.” Two years before the death of her husband in 1941, she was living in Camelford, North Cornwall.