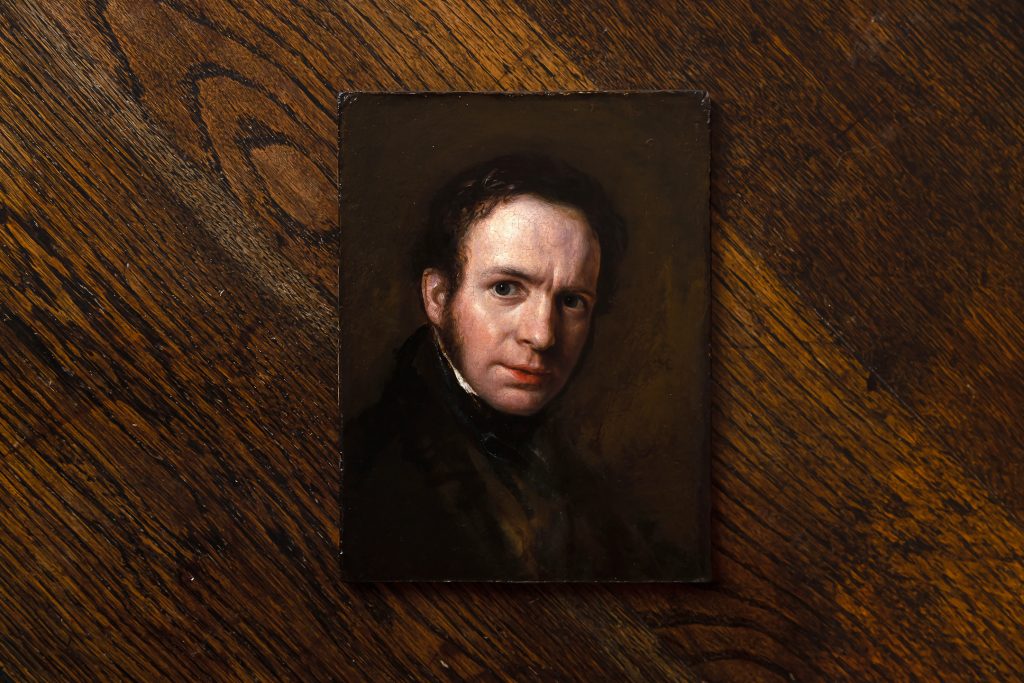 Subject: Himself / Self Portrait

This arresting self-portrait of the artist William Dixon was likely painted between 1817 and 1824, when the artist had set himself up as a portrait painter and could afford to keep lodgings in Newcastle, Durham and London.

His landscape sketches seem to have left a lasting impression on Linnell, who was quick to acquire them after Dixon’s death (c1834). Most of these were unsigned and were therefore easily conflated with Linnell’s own work, when inherited by his family decades later.

The details of Dixon’s early life are difficult to piece together. He is described as a “protégé of William Mulready”, despite being at least a year older. The two were more likely contemporaries, working together in the studio of the genre painter and adventurer Robert Kerr Porter. On the 2nd July 1801, aged sixteen, Dixon entered the Royal Academy Schools.

Despite there being successful periods, the career of Dixon seems to have passed in relative obscurity and financial uncertainty. Linnell describes the chaotic scene following his premature death:

A single man in lodgings in Tichfield Street he was found dead in his bed one morning in a wretched condition. He would not allow his room to be cleaned like other people but like a miser waited upon himself – his portfolios were rich in beautiful studies from nature made for the pictures which came to nothing through double mindedness & infirmity of purpose – but the disorder in which these studies were kept defies description. Some of them were to be found in the table drawer & were only discovered when the author of them went to look for spoons for tea…

Inscriptions:  “William Dixon | Painted by | Himself”