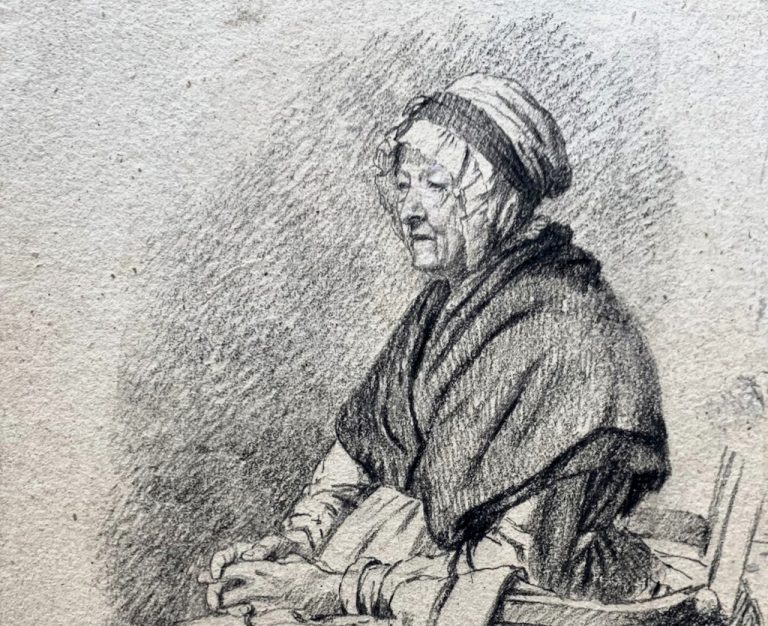 Walter Geikie was born on 10th November 1795, to a wealthy Edinburgh family. A  serious infection at the age of two, described as a “nervous fever”, lead to his permanent loss of hearing. This was perhaps the result of meningitis, as he remained sensitive to sharper sounds at first, but became completely deaf soon after; a probable consequence of his cochlea ossifying in the months after his recovery.

Unlike the profoundly deaf, who at this time,  generally lived without speech, Geikie’s father taught him to read and write, and introduced him to the manual alphabet by way of Dr. Charles Stuart, who demonstrated with the use of his tongue and lips, how best to articulate the sounds. He progressed quickly, from letters to syllables and syllables to words.

The education must have worked, for Geikie’s brother Archibald describes how “his pronunciation was so generally correct” that “he rarely used his fingers” when conversing with those who knew him well.  It is also telling that although Geikie was a day scholar at Thomas Braidwood’s Edinburgh School for the Deaf, he was generally employed as an ancillary teacher, guiding his peers and gaining little from his schoolmaster.

As is so often the case, the loss of one sense leads to the intensifying of another. Geikie began to draw as a boy: “figures on the floor… doors…” indeed, “any smooth surface within reach” became a target for his crayons. His father encouraged him to sketch from life, instead of copying drawings. This habit would remain with him throughout life and Tait’s Edinburgh Magazine of 1843, points out that as the drawing academy had not yet acquired the antique busts and friezes that became the formative sketches of the next generation, Geikie would instead have to consult his everyday surroundings.

At the age of fifteen, he joined the studio of the landscape painter Patrick Gibson, where me made quick progress. He was admitted to the Trustees Academy of Drawing just 2 years later, studying under John Graham (1754 – 1817), the “inspirational and effective” teacher, who taught William Allan and David Wilkie. According to his brother, he left  the academy “with the reputation of being one of the best draughtsmen who had ever passed through it,” something he then attributes to his “early habit of drawing from the object.” The proficiency of his eye was such, that unlike his fellow students he could reduce a subject to a smaller dimension without the guiding lines that they were normally taught to use. His brother also describes his ability to sketch out the birds-eye-views of local estates, by eye alone.

As an artist, he travelled widely for his material, attending the weekly markets in Edinburgh, familiarising himself with the various characters and their daily lives. In portraying another way of life, he continued in the tradition of artists such as Paul Sandby, William Hogarth and Thomas Rowlandson. Though unlike the latter he was for the most part a sympathetic observer of the urban poor. He did occasionally run into trouble though, and his not especially subtle attempts to sketch the pot-bellied porter at the Grass market, resulted in him being chased through the Edinburgh streets. A situation not helped by the difficulties in communicating with his reluctant sitter.

Having compiled so rich a collection of character studies and sketches, it would seem a logical step for Geikie to move on to print making. He began to etch his designs on copper plate, familiarising himself with the painstaking craft that occupied the second half of his career. A combination of family wealth and success meant that he was soon able to afford a printing press, from where he published the scenes and views for which he is best known. It is likely that without the specific quirks in Geikie’s character; the loss of his hearing, combined with an artistic education that pushed him away from the classroom and towards his surroundings, that the daily and unglamorous realities of Scottish life would have gone unrecorded.

At the age of 41, Geikie died following a short illness. It is likely that his stoic nature and good health lead him to ignore the infection, and on the day of his death on 1st August 1837, he had just finished readying his supplies for a drawing trip in the west highlands.

Despite his relatively short life, Geikie was prolific draughtsman and printmaker. The vast majority of his sketches were left to the National Gallery of Scotland. His prints were circulated further. He was less prolific with his paintbrush, a medium which he undoubtedly found difficult, with his early biographers suggesting he might have suffered a form of colour blindness.

It is interesting to note that Geikie’s industry was not soley confined to the artist’s studio, and perhaps his most lasting contribution to Scottish life, came with the congregation for the profoundly deaf, which he helped to form with Alexander Blackwood, Matthew Robert Burns and Joseph Turner. It was the first of its kind and though Geikie would not live to see it progress, it would encourage the formation of similar societies in London, Liverpool and Manchester.