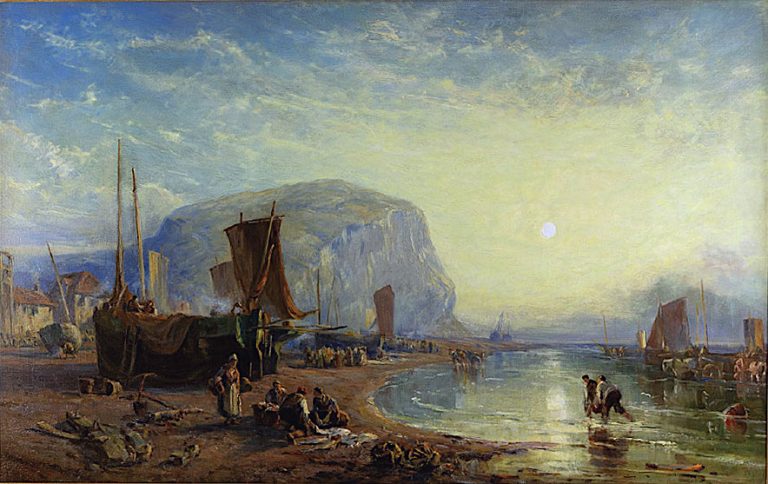 It is likely that the painting represents an alternate view of Staithes, the fishing village that Pyne painted on numerous occasions. In the case of this view, the composition is taken further along the bay and the iconic cliff face is therefore seen from a different angle. The fisher folk also play a more significant part, unlike those small and distant figures that appear in his earlier interpretations. A pony wades through the shallows, pulling the fishing boat ashore. In the middle distance, two men pulling a handcart approach a large crowd of people. A pair of fisherman can be seen struggling with a heavy load in the foreground. The painting is dated 1856, two years after Pyne returned from his European tour of 1851-1854.

James Baker Pyne (1800-1870) was an English landscape painter, who was quick to realise the significance of JMW Turner’s new approach to landscape painting. He was a part of the Bristol School and was heavily influenced by William Danby. His interest in the Yorkshire coast is typically dated to the 1840s, when he began painting the picturesque bays and inlets around Whitby, Scarborough and Mulgrave. These paintings would prove prophetic, and forty years after his death in 1870, a colony of painters would settle in Staithes. The Staithes Group would include artists such as Laura Knight, her husband Harold, John Barrett, Jospeh Richard Bagshawe and many others.