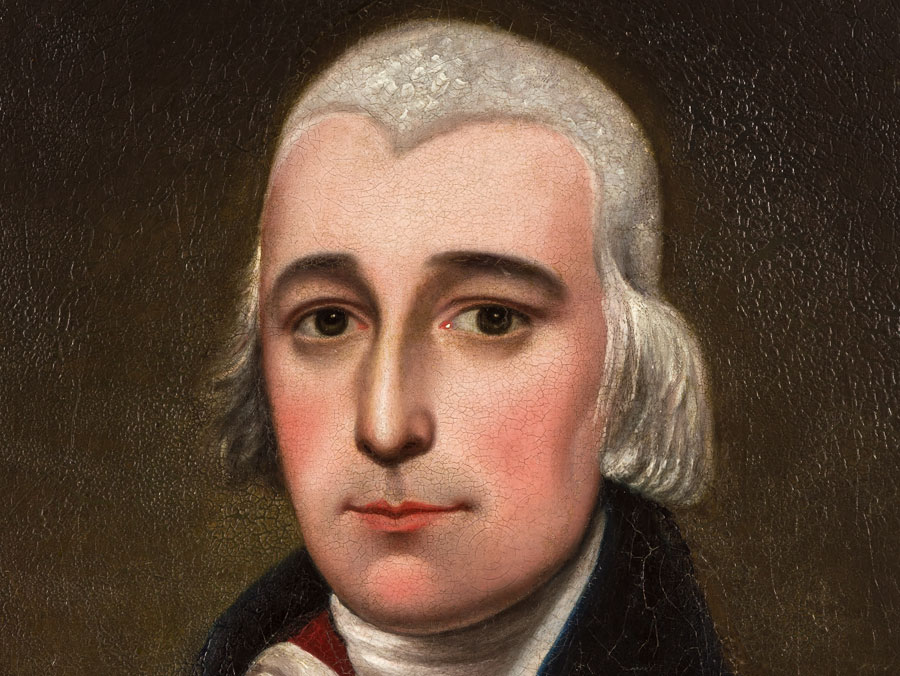 Humphry Repton (1752 – 1818) was an English landscape designer of the late Georgian period and widely regaded as the heir to the great Capability Brown.

Here, Repton is depicted as a young man, likely nearing thirty. He has a large aquiline nose, high cheek bones and a full head of hair. Even at this age he has the distinctive ‘widow’s peak’ that subsequent depictions would show receding. His hair is thickest at the ears, in the curious ‘spaniel-dog’ style that he would keep for this rest of his adult life. He wears a navy-blue jacket with a frilly white collared-shirt.

The portrait came from a cache of old paintings retrieved from an outhouse on the Kitley Estate, near Plymouth. Repton’s youngest son George Stanley Repton (1786-1858), remodelled the house in the 1820s, converting the classical interior to the Elizabethan style.

Humphry Repton would preside over many estates in Devon in Cornwall and the area around Plymouth seems to be a hotspot for his work. The gardens at Pentillie, Antony and the Greenway were all modelled by him. This is likely a consequence of his close relationship with the 6th Duke of Bedford, whose extensive Devon estates were not simply receptacles for Repton’s vision, but also potent adverts to the surrounding landed gentry.

At Pentillie House he was given complete artistic license. Little heed was paid to the flower beds or trifling details of the garden, but instead he could focus on his ambitious plans to alter the entire landscape around the house. The grounds at Pentillie are also rare for having escaped the designs of later landscapists.