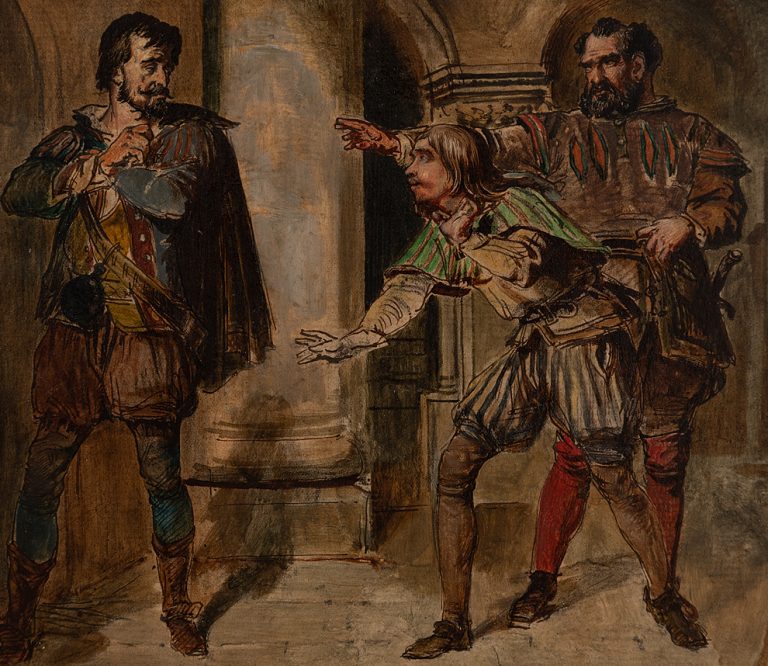 Medium: Oil (and pen) on Paper

The present work is typical of the late works of James Mathew Leigh, whose increasing and unselfish dedication to his students meant that by this point he rarely left the walls of his own drawing school. He instead painted literary themes, and the following scene from Shakespeare’s Measure for Measure, shows the clown and the executioner Abhorson, pointing at the condemned Barnardine, just a few moments before the Duke and provost enter the room.

Though relatively obscure, James Mathews Leigh proved a seminal figure in the history of British art and from his small drawing school at 79 Newman Street, exerted a profound influence on Victorian cultural life.

From 1841 to 1860, Holman Hunt, Frederic Leighton, Edward Poynter, Rosetti, Millais and William Makepeace Thackeray all passed through his academy. The school was perhaps unique in that it was also open to female students; the pre-Raphaelite Anna Blunden (1829-1915) was an early student there, many years before Laura Herford (1831-1870) became the first woman to enrol at the Royal Academy schools in 1860.

Leigh is described as ‘a strongly built man’ with ‘a piercing eye, square jaw, and thin lips.’ An accomplished scholar and linguist; he had inherited a love of literature and history from his father Samuel leigh, whose publishing house on the Strand was frequented by William Blake.

Though he travelled across Europe in his youth and exhibited frequently, Leigh seems to have had little interest in fame or material wealth and instead lived and dressed like a monk, wearing a black cap and cassock. His dealings with the Royal Academy and Royal Institute end abruptly in the 1840s, possibly as a consequence of his teaching commitments. His later works lined the walls of his own academy, where presumably they escaped the attention of influential critics and instead furnished the minds of the next generation of Victorian talent. After a life of incessant smoking (he was rarely without his long pipe) he died in 1860 of throat cancer.