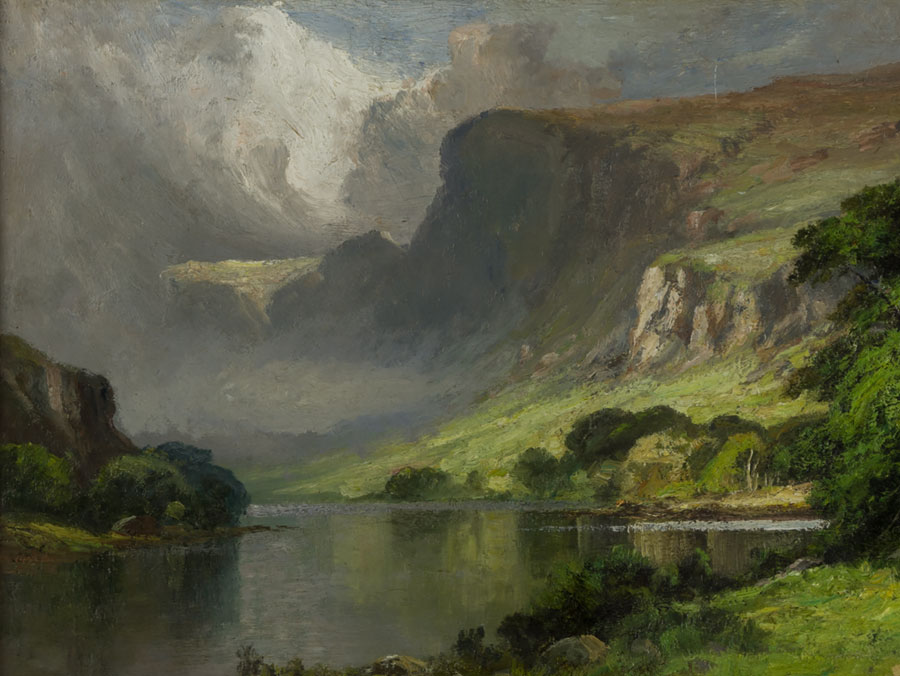 Lake Derwentwater seems to be an important subject for Carter, and he attempted this composition on multiple occasions. An identical but larger painting is displayed in the South Shields Museum and Art Gallery, whilst a smaller preparatory study of the same subject appeared at Weschler’s Auction House, USA in 2003.

The painting depicts Lake Derwentwater on a beautiful summer’s day. Tall hills, rocky outcrops and low cloud comprise the background of the painting, whilst in the foreground a dirt pathway trails up towards a large pair of trees. These are crucial to the composition, as by breaking the light with a band of shade, they allow the painter to display his exceptional grasp of the Impressionist genre.

Frank (Francis) Thomas Carter (1853 – 1934) was a British landscape painter, who specialised in views of the Lake District and coastline of northern England. Born at Warkworth the son of the stationmaster, Carter would receive no formal training, but would instead be drawn to painting as a young man, when he was tasked with clearing an artist’s studio. Increasingly he would devote more time to the hobby and would seek to sell the works he deemed adequate. It was said that Carter would spend six days of the week as an innkeeper and Sundays as a painter. During his career he would exhibit extensively, including 18 times at the Royal Academy and once at the National Academy. He was an active member of The Royal Society of British Artists, The Royal College of Art, The Royal Hibernian Academy, The Royal Cambrian Academy, The Royal Institute of Oil Painters and The Royal Scottish Academy. Carter’s work can be seen in many galleries, including the Laing, Shipley and South Shields.