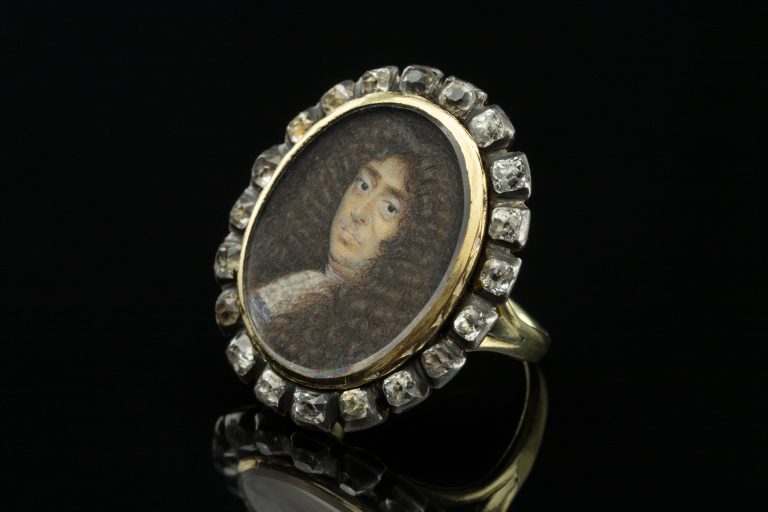 This unusual ring mounted with a portrait of King Charles II was likely given in recognition of past loyalties.

After his defeat at the Battle of Worcester on 3rd September 1651, a reward of a thousand pounds was offered to anyone with information leading to the “Discovery and Apprehending of Charls Stuart.”

An improbably large sum at the time (almost 150,000 pounds in today’s money), Charles would spend the next 6 weeks in flight, across the western counties and Wales, before later arriving in Dorset, where on the 15th October 1651, he escaped to France on a coal boat. For the next nine years he would remain in exile, before returning to England in 1660.

During his escape, he was aided by a network of sympathisers and whilst taking refuge at Colonel Charles Gifford’s house in Shropshire, the future King was reported to have hidden in the bough of an oak tree in Boscobel Woods. He later recounted the story to Samuel Pepys, describing how a Parliamentarian sentry passed directly below him. The story proved popular during Charles’s reign and Royal Oak Day was celebrated each year on the 29th May.

A similar ring attributed to Nicholas Dixon (c1645-1708), passed through Wooley & Wallis back in 2016. It had reputedly been given to Jane lane by Charles II, “in recognition and gratitude for the courageous loyalty he had received… when escaping England…”. Another comparable ring in the collection of Anglesey Abbey is attributed to Samuel Cooper (1608-1672), though it is more likely to be the work of Nicholas Dixon.

Nicholas Dixon (c1645-1708) was a resourceful and skilled painter who served as a court limner to Charles II from 1673-1678. His works shows technical similarities to the great Samuel Cooper, under whom he might have trained. His house in Long Acre, would have been just a short walk from Cooper’s in Henrietta Street.

Later in his career, he became increasingly interested by money, and though his position as Court Limner and Keeper of the King’s Picture Closet guaranteed a salary of £200, he was also active in the art market. Vertue records how he ‘bought once a picture… at a very small price, & sold it to the Duke of Devonshire for £500.’ He later organised an ill-fated lottery of miniature copies after the old masters. Such enterprise would suggest that he kept an active studio, something which might also explain the varying quality in his work.

The miniature has been mounted in a silver bezel, with rose coloured paste stones. The reverse has been enamelled in cream and painted with pink and black scrolls. According to the art historian and jewellery specialist Diana Scarisbrick, the enamel setting is characteristic of the period following the Restoration of Charles II. Similar enamel work can be seen on miniature of Lady Anne Hyde by Richard Gibson (1615-1690), once in the collection of D.S. Lavender. 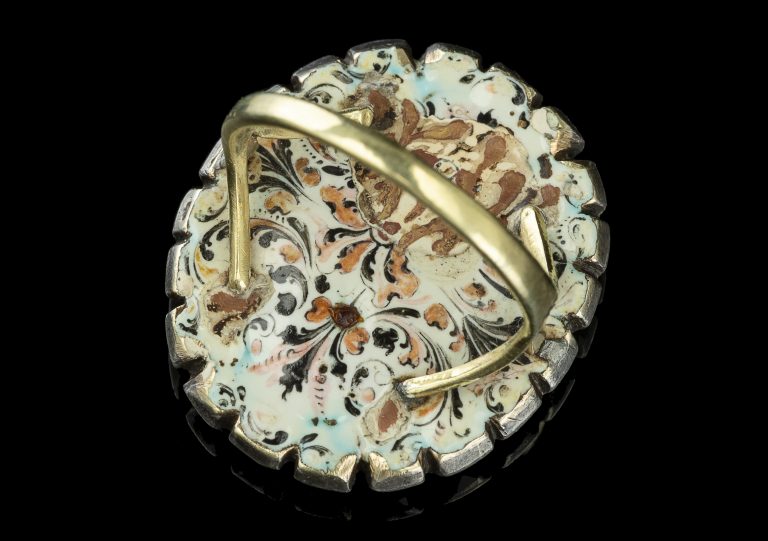