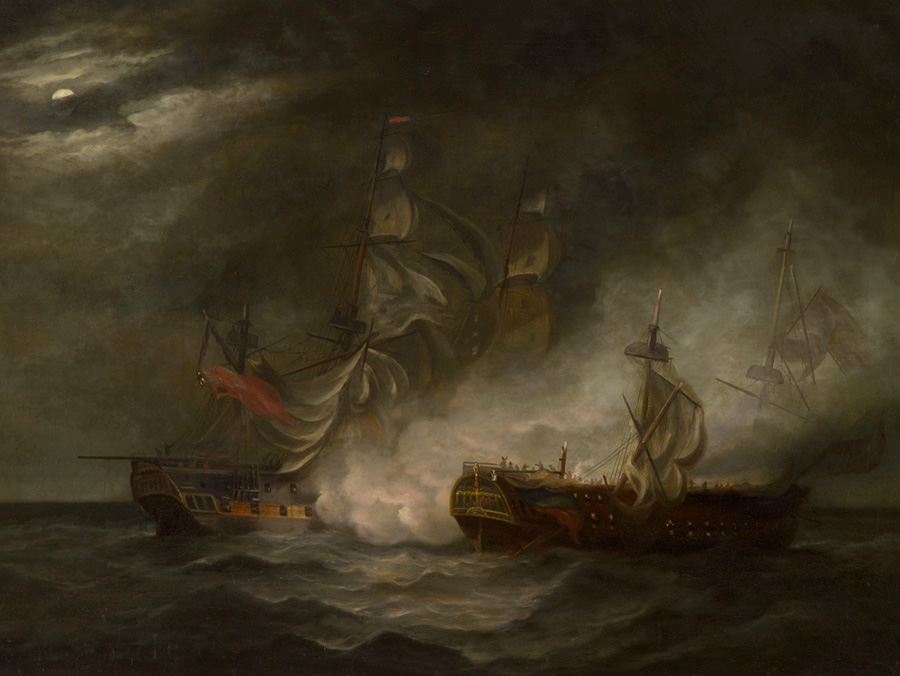 A turning point in the wars of the 1st Coalition, the year of 1796 saw the early successes of the allies undone by Napoleon’s ingenuity in Italy and the resolve of the Revolutionary Army on the Rhine. Austria’s defeat in the next year would leave France without a continental rival and free to turn her attentions to Britain, thus resuming the Struggle for the Seas that was so often at the root of conflict between the two countries.

The year of 1796 was a significant one in the life of Edward Pellew also, whose personal fortunes by this point had become closely entwined with those of the country.

The painting interprets the capture of La Virginie by HMS Indefatigable, which took place a ‘little after midnight’ on the 22nd of April 1796. After a 15-hour chase, the two frigates crossed paths off the coast of Brittany, where La Virginie was taken without a single casualty sustained. A letter sent by Pellew to the Lord Commissioner of the Admiralty, described her as the ‘finest and fastest sailer in the French Navy.

Such an acquisition added to the national fame that Pellew had already found just two months earlier, when braving the Plymouth Sound in January, he swam out to the Indiaman Dutton and ‘helped rig a lifeline that saved almost all aboard.’ His bravery saw him awarded a baronet from King George III. Pellew would come to embody the best aspects of the Royal Navy and would prompt the hand of Nicholas Pocock, then marine painter to the King, to paint two oils: one interpreting ‘The Wreck of the Dutton at Plymouth Sound” and the other, “The Capture of Virginie by HMS Indefatigable.” The former would stay in Plymouth, whilst the latter would go to the Mariner’s Museum of Virginia. Both were typical of a school of marine painting that capitalised on the public need to see heroic and reassuring images.

With that in mind, it is perhaps interesting to note that this painting was sold alongside another pendant entitled the ‘Wreck of the Indiaman ‘Dutton’ in Plymouth Sound.’ The ‘Wreck of the Dutton’ is a subject Luny is known to have painted at least 7 times and is one of his many works he painted for the Admiral that lived just two-hundred feet from his house in Teignmouth. A ledger in the National Maritime Museum records Luny satisfying numerous commissions for both Pellew and his wider family.