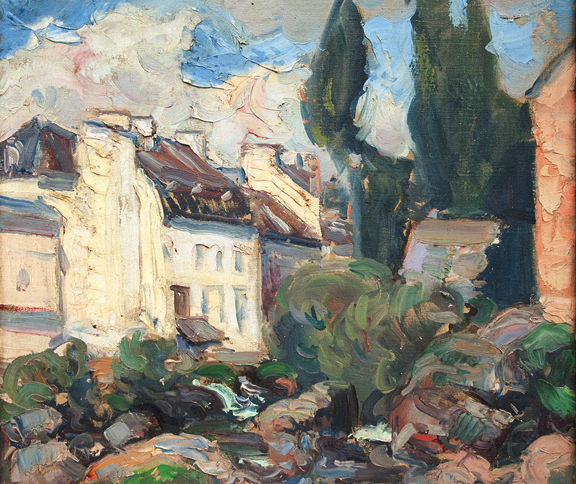 This unusual post-impressionist canvas was painted by the obscure and eccentric Hendrik George van Rinkhuyzen (1868-1922), a Dutch painter who moved to Paris in the early 1890s.

It would seem that he was a man of means, who had no need to sell his paintings or to exhibit them to a wider public. He married the American painter Lucy Lee-Robbins in April of 1895, who was three years his senior. According to “Not Above Reproach”: The Career of Lucy Lee-Robbins (1998), “The couple moved in affluent circles… Van Rinkhuyzen belonged to several exclusive clubs, including the Travellers, Golf de Paris, and the Societe Sportive de l’Ile de Putea.”

This extract from the New York Times (12/11/1922), written just a few months after Rinkhuyzen’s death, records his posthumous solo exhibition:

At the Klingore Galleries, until Nov. 26, the public may see the paintings of H.G. van Rinkhuyzen, whose work has not before been exhibited in this country. To the end of his life this painter was able to follow his path in his own way. He was not obliged to turn out potboilers, and often long periods of time passed during which he refrained altogether from painting. He studied Cezanne and Van Gogh, and the swirling line of the latter reappears occasionally in his flower subjects and landscapes, but he is not in bondage to it. His boat subjects are filled with life and animation, and even in his still life he has sought to express the mobility of solid objects. Guillame Janeau (sic) who writes the eulogistic introduction for the illustrated catalogue of the exhibition, says that Van Rinkhuyzen destroyed all the work of his earlier period, keeping only what he thought most expressed his intimate feeling for nature and art. He was planning his exhibition when he died.

In the same year, the art critic and writer Guillame Janneau would publish “L’œuvre de Henri Georges Van Rinkhuyzen”, a work of just four pages and sixteen illustrations. The New York exhibition would be preceded by another retrospective at the Druet Gallery in Paris. This favourable review, written in American Art News (06/10/1922), describes how:

The Dutch love for flowers, and, especially, for the robust, most intensely-hued varieties, was brought to mind at the posthumous display of the work of Henry George van Rinkhuyzen who, a Parisian personality of prominence in life, has become a painter of eminence in death.  A picture of azaleas is one of the most complete pieces of oil painting I have seen for a long time, containing all the perfection of Fantin at his best, with more of vigor, freedom and dash. In certain pictures of fishing smacks at Concarneau the kaleidoscopic effect of multicolored sails reflected in the shimmering water is rendered with Oriental splendor and decision.

One can only speculate as to what legacy Van Rinkhuyzen might have left, had he not destroyed the bulk of his work.

I am grateful to Mary Prevo for her help in cataloguing this painting. 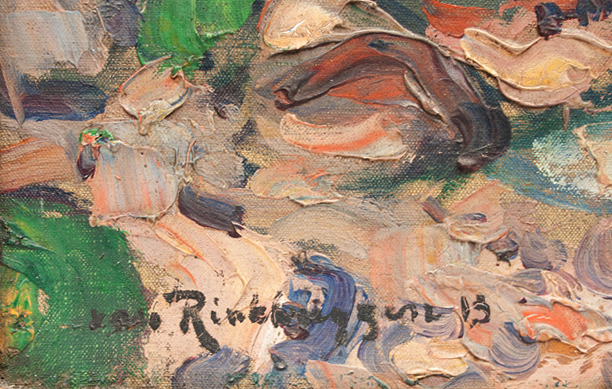