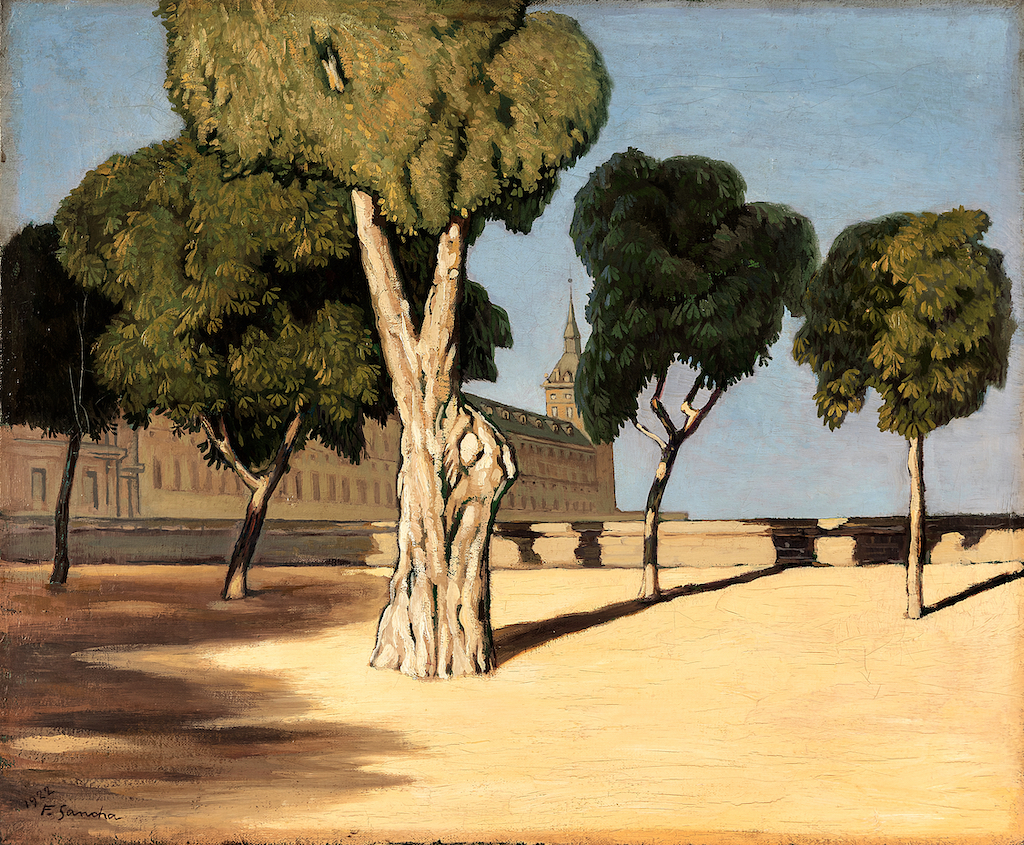 Francisco Sancha’s Spanish landscapes capture the intense light of Castile. This view of the Monastery of El Escorial was painted in 1922, shortly after the artist returned to Madrid from London.

In in its quiet serenity, the scene throws to mind the paintings of Algernon Newton (1880-1968), or the surreal and deserted streets of Edward Hopper (1882-1967). That all 3 artists arrived at a similar style, independent of one another, might speak for a general feeling common to the period following WWI and the Spanish Flu. The cities themselves remained the same, but the humans that inhabited them had changed a great deal. Not simply fewer of them, but also a general distrust of human contact; a wish to retreat from public life into introspection and isolation. In the case of Sancha, who would die in a political prison just 14 years later, such instincts were well-founded.

Francisco Sancha y Lengo was born in Malaga in 1874. He attended the School of Fine Arts there and studied under Joaquín Martínez de la Vega, the eccentric, influential teacher that baptised a young Picasso with champagne before declaring him a genius. Such an education served him well, and by 1897 Sancha was studying at the Royal Academy in Madrid under José Moreno Carbonero (1860-1942).

Soon after the National Exhibition in 1899 Sancha left for Paris with the encouragement of Prime Minister and a scholarship of 1000 pesetas. Picasso joined him a year later, and he too would find that pesetas did not go far in the French capital. Sancha took work with journals such as Le cri de Paris, Le rire, Frou-Frou and L’Assiette au beurre. For the latter he provided numerous illustrations and it was likely through him that the magazine later approached a desperate Picasso with an offer of 800 francs in late 1900. The two seem to have been close friends. The sculptor Alberto Sanchez Perez recalls how in 1937 he informed Picasso of the death of Sancha, prompting him to reply: “Poor Paco, I owed him 100 francs.” It is also telling that in January 1969, when responding to a journalist on which artists he most admired, Picasso replied “Miguel Ángel [Michelangelo] y Paco Sancha.”