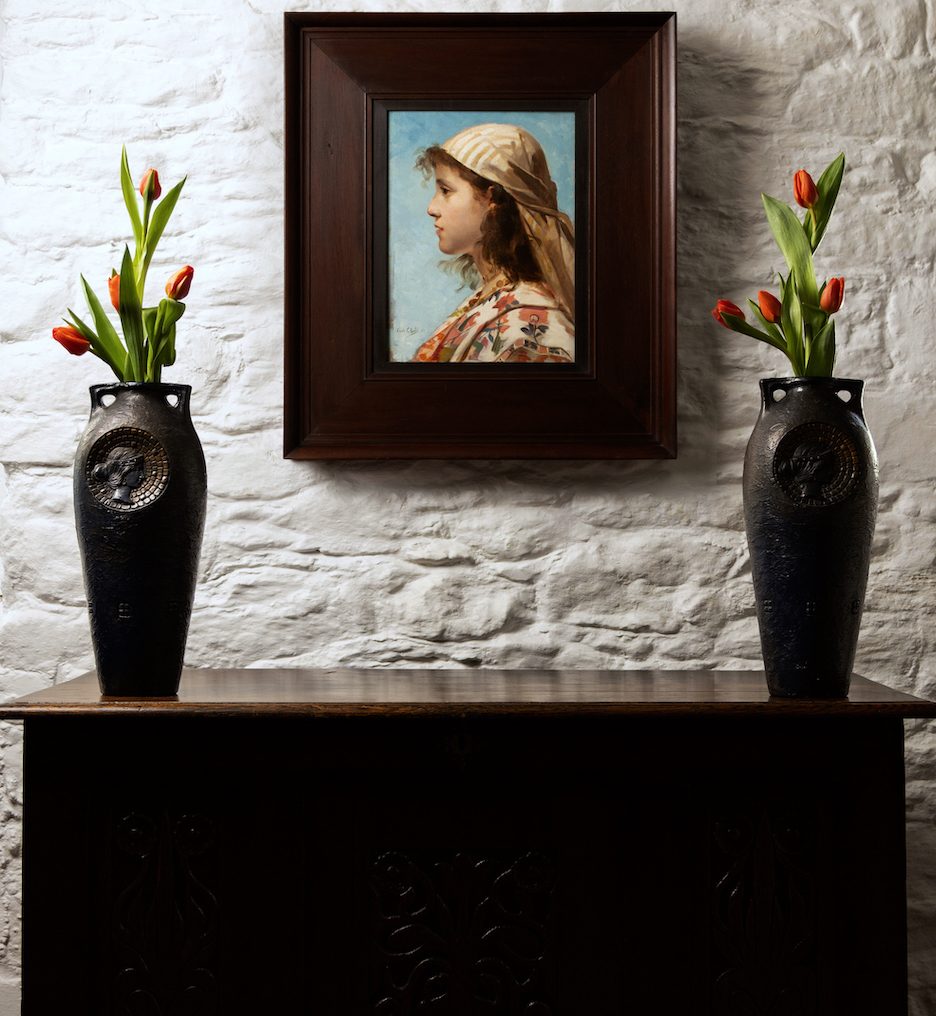 The life of Emile Charlet (1851-1910) can be pieced together through his contemporaries. His brother Frantz Charlet (1862-1928) was a friend of Theo van Rysselberghe (1862-1926), both were founding members of Les XX Group, the short-lived modernist circle, which broke away from the formality of the Belgian Royal Academy, and later typified a general rejection of academicism. It attracted an international following, including the poet Verlaine and the composers Debussy and Faure. Visiting artists included Whistler, Rodin, Monet and Gaugin to name a few. The group was also quick to recognise the talent of van Gogh and held a retrospective of his works shortly after his death in 1890.

He was born in Brussels in 1851 to a wealthy family. It isn’t known at what point he entered the Royal Academy there, though he learnt enough of its conventions so that he might later reject them. He also came under the influence of the orientalist Jean Francois Portaels (1818-1895), who was once a pupil of Paul Delaroche (1797-1856). In Delaroche’s studio, Portaels likely met the young Jean-Léon Gérôme (1824-1904) and it is telling that he frequently instructed his students (Charlet’s younger brother included) to study with Gérôme in Paris.

He likely did the same with Emile, who was living in Paris by 1879. His brother and van Rysselberghe joined him there in 1881, shortly before their tour of Spain and North Africa.

It is possible that Emile travelled with them. He frequently accompanied his brother on painting trips, including one to Nunspeet and Volendam in 1885, where they were joined by James Abbot Mcneill Whistler (1834-1903). His picture of market women in the Zuiderzee Museum was painted at this time and in the pointillist style of artists such as Georges Seurat, Paul Signac, van Rysselberghe and Les XX Group.

This painting might suggest that his affiliation to van Rysselberghe came earlier. It was painted in 1882, just a few months after van Rysselberghe painted his Spanish Gypsy or Romani Girl in profile and around the same time that Frantz Charlet and van Rysselberghe would begin their travels in Spain and North Africa. In technique and composition it is practically identical to that painting.  Indeed, certain idiosyncrasies, such as the tips of the hair, suggest they were unlikely to be painted independent of one another.

It is highly likely that this painting featured in the “Ancien Atelier Portaels” exhibtion in Brussels in 1883, under the title “Bohémienne.” The reverse bears a ink stamp for Adèle Deswarte, the female art dealer and supplier, who sponsored and edited the exhibition.