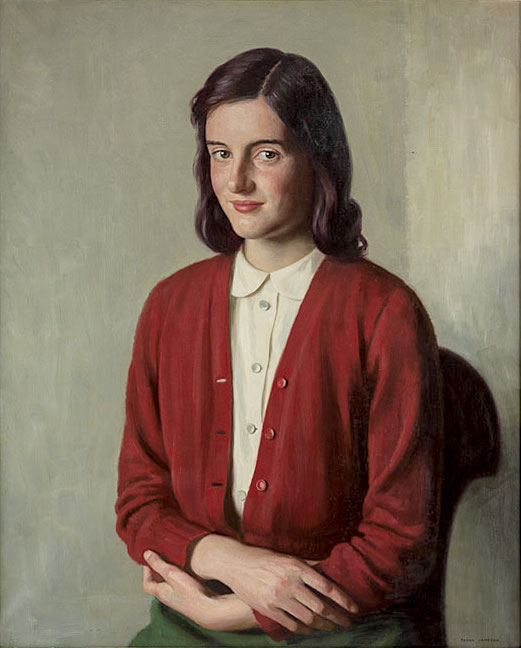 This portrait of the artist’s daughter Daphne was likely painted in 1953, when the sitter would have been fourteen. Visibly embarrassed at the idea of sitting for her own painting, the portrait comes at interesting point in British social history, just as the ‘teenager’ was becoming an established notion. In previous times a child would have become an adult, with no intervening period.

Jameson frequently painted his daughter and a smaller study of a younger Daphne passed through Christie’s on 22nd April 2008. Another painting in the Falmouth Art Gallery, almost certainly related to this portrait and dated to 1953, is entitled “A Quiet Read” and shows the artist’s daughter at the same age, wearing the same red cardigan.

Frank Jameson (1898-1968) was born in London. Little is known of his early years, though he moved to Birmingham as a young adult, possibly to pursue his interest in painting. He attended evening classes at the Birmingham School of Art, whilst selling insurance policies by day.  With the outbreak of the First War, Jameson became an officer in the Worcestershire Regiment. Settling in Redditch after the War, his first experiences of Cornwall came in his camping tours of Southern England. He would later move there: first to Newlyn, where he studied at the Forbes School of Painting; and later to St. Ives and Falmouth, where he took a studio in an old sail loft. He later became a member of the St Ives Society of Artists, exhibiting frequently from 1939 to 1951. Two of his paintings were shown at the Royal Academy in the previous year and he would continue to exhibit until the early 1950s.