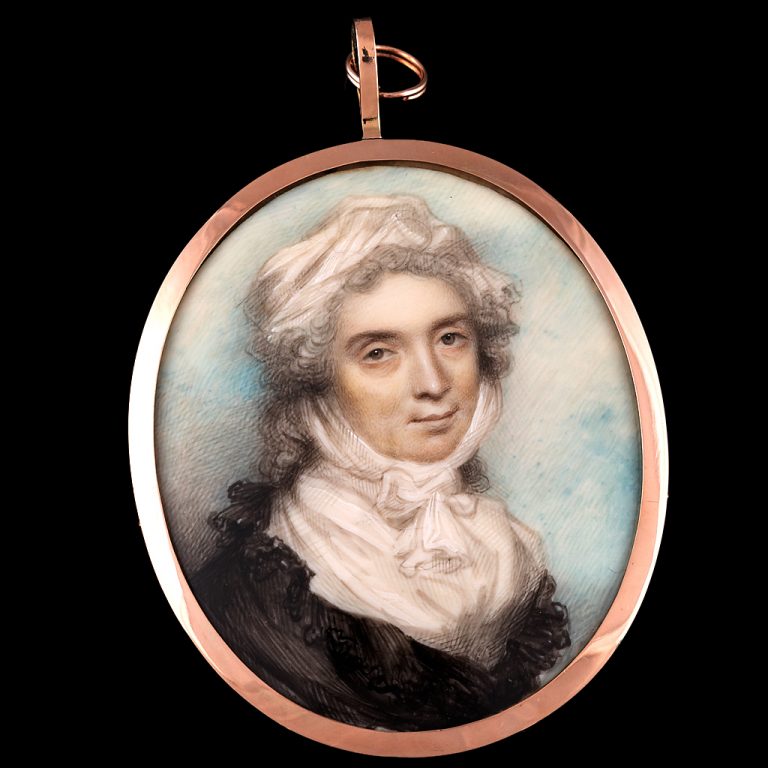 The art historian George Charles Williamson, describes the whimsical years of Andrew Plimer’s early life with a curious precision. He was born to a successful clockmaker, a profession that would have provided for him and his elder brother Nathaniel, but finding themselves unsuited to the lifestyle, they ran away and joined a party of travellers. Seemingly they had absorbed something of the family craft, as for the next two years they lived by their paintbrushes, fashioned from the hair of various animals, decorating the backdrops of village plays and the caravans of their hosts. The latter they did with such skill as to be offered ‘the prettiest girls of the tribe for their wives.’

Nearing London, they felt the magnetic pull of the city and leaving their friends as they had once left their family, they walked away: ‘their worldly possessions on their heads, tied up in two red and yellow shawls.’

In London they resumed contact with their parents, who, magnanimously, gave them the money to pursue their artistic ambitions: Nathaniel became an assistant to Henry Bone (1755-1834), whilst Andrew Plimer became the personal servant of Richard Cosway (1742-1821), the miniaturist who had just painted the future King George IV. He also became a friend and confidant of the artist’s wife Maria Cosway (1760-1838), a lady of many talents, who presided over a large and cultured circle. Her marriage to a much older man was widely considered to be one of convenience and it is likely that she shared more in common with Plimer who was of a similar age.

Plimer’s talent for miniatures was first detected when he was found copying one of his master’s paintings. Recognising his potential, he sent him to study drawing under John Hall (1739-1797 ), a capable draughtsman, best known for his printmaking. Despite this, Plimer, like Cosway would remain for the large part a lazy draughtsman, with a miniaturist’s eye for elegance and a commercial need to refine the faces of his sitters. Such distortions are less obvious in earlier works, where individual features are discernible. In later portraits, possibly linked to the financial pressures of familial life or to waning commissions, his paintings, particularly of women, begin to resemble one another, with elongated noses and oversized eyes conforming to the fashionable beauty standards of the period.