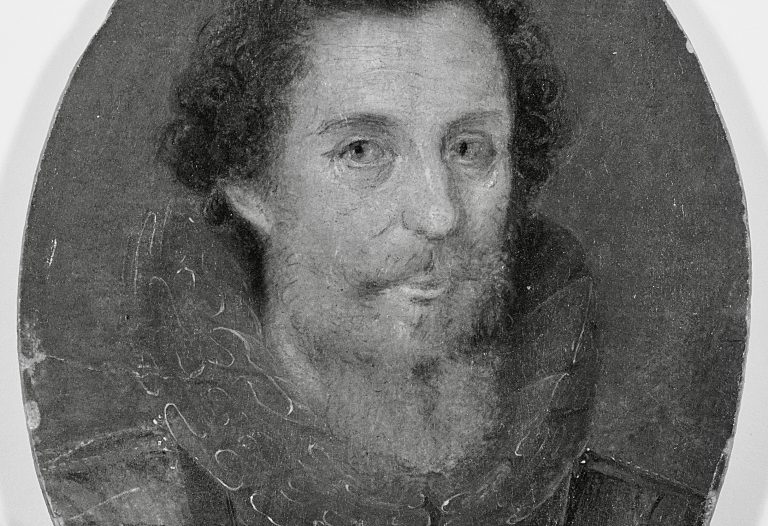 Ever wondered how a 16th century miniature portrait would react to copious amounts of radiation?

Rather well it would seem.

Paintings of this era are particularly good for infrared analysis, for their priming layer tends to reflect the radiation, whilst the charcoal under-drawing absorbs it.

One therefore sees what the artist might have seen, before they picked up their paintbrush.

In the case of this portrait of the 2nd Earl of Essex, the dryness of the sketching suggests charcoal, whilst the free and instinctive application, shows a confident artist finding his line. Such a technique is essentially trial and error; the faint and initial searching lines, which guide where the more definitive lines will later be drawn.

Towards the left of the Earl’s nose, the sketching is particularly free.

Microscopic photographs also come in handy, as the materials of this period were not the industrially-mixed paints of later centuries, but were instead hand-ground and mixed, showing impurities and inconsistency.

The eyelashes have been created by dragging the flesh tones downwards through the black glaze, whilst both were still wet (photograph 2).

In the case of the eyes, as well as the Earl’s costume and ruff, a lead white pigment has been used to highlight the grey priming layer.

The Earl’s facial hair consists of various earth pigments from a bright yellow to a dark umber. The artist has finished the beard with opaque purple (the same pigment used in the background) to create the effect of shadowing.

This study carried out on Gheeraerts’ full-length portrait of the 2nd Earl at the NPG back in 2012, revealed the same grey priming layer as well as remarkably similar handling of the eyebrows. where hatched brown paint is applied directly over the charcoal under-drawing (photograph 2).